Although we’re living in a generation where streaming services have essentially taken over our media consumption, a traditional media player never goes out of fashion. Whether you want to watch a video you have recorded or watch an offline copy of your favorite movie, it is hard to imagine the absence of a media player. So if you are looking for the best media players to use on your Windows 10 computer, we have compiled a handy list for you. So let’s not waste any more time and jump right in.

If there’s one software on this list that I will happily use for years to come, it is VLC Media Player. In case you’re unaware, the VLC media player is a free and open-source multimedia player capable of playing almost anything you throw at it. You can use the VLC player for playing MPEG-2, MPEG-4, H.264, MKV, WebM, WMV, MP3, and more on your Windows 10 PC. Thanks to its cross-platform availability, you can also use VLC media player across a multitude of platforms, including Linux, macOS, Unix, iOS, and  Android.

One area where VLC media player could use some improvement is in terms of design. I understand why the non-profit organization is taking an ‘If it ain’t broke, don’t fix it’ approach, but the interface of VLC might not be appealing to everyone. If you need a version of VLC that goes easy on the eyes, you could check out the Microsoft Store UWP variant but it doesn’t support DVD or Blurays. You could also try to elevate the aesthetic by using skins or check out other VLC tips and tricks right here.

MPV player is another powerful media player for Windows 10. While it may seem like a basic player on the surface, you can unleash its true potential with the help of user scripts. There are hundreds of user scripts available in the MPV GitHub wiki to help you enhance the player’s capabilities. All you have to do is move the script to the script folder (usually C:/Users/Username/AppData/Roaming/mpv/scripts/) to use them.

While MPV is wildly popular among Linux users, its Windows version isn’t too bad either. Whether you consider yourself a power user who wants to finetune the media player or a minimalist who wants to playback videos, you can’t go wrong with the MPV Player.

KMPlayer is another option you can consider if you are looking for feature-rich media players for Windows 10. You can use KMPlayer to watch up to 8K videos, and it supports a variety of video codecs, including HEVC (h.265), h.264, and VP9. You also get support for playing Blu-ray and DVD content here. Much like VLC player, you won’t have any trouble playing most media formats on KM Player.

One unique aspect of KMPlayer is that it lets you create GIFs from videos. You can use the keyboard shortcut Ctrl+G to access the GIF creation interface. You can also use KMPlayer to download YouTube videos.

If you’re old enough, you might recall Media Player Classic. In an attempt to resurrect MPC, developers created a fork of the project with the name MPC – Home Cinema. Although MPC-HC’s development eventually came to an end in 2017, there exists another fork called Media Player Classic – Black Edition. 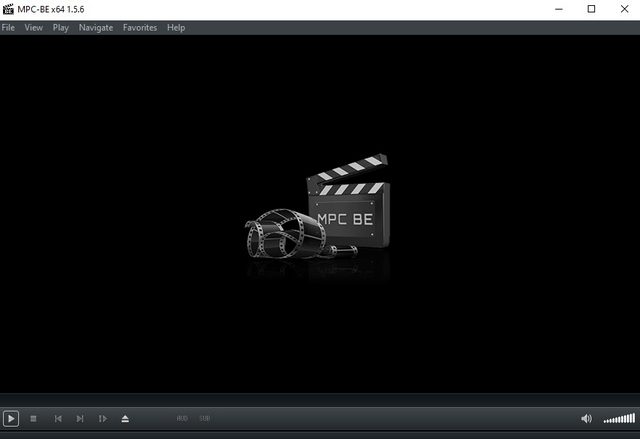 Unlike MPC-HC, MPC-BE is still actively maintained and is getting regular updates. If you prefer Media Player Classic’s interface, you should try out this fork. It also comes with additional features, including hardware decoding and deinterlacing, and it automatically mounts ISO images.

Although Kodi is a media server app, you can use it for all your media playback needs on Windows 10. It plays almost all widely used media formats. As you can see in the image below, there are separate sections for music and videos in Kodi. This way, you can easily organize your media files without a hassle.

Kodi’s full potential lies in addons. Using add-ons, you can enhance the capabilities of the application. If you have never used Kodi or heard about it before, check out our beginner’s guide on Kodi to know everything about it.

Another media player worth trying out is the GOM Player. It comes loaded with all the features you would expect from media players for Windows 10, including support for 360-degree VR mode and EQ presets. One notable feature of GOM Player is that it can even show you two subtitles simultaneously.

One thing you should keep in mind before using GOM Player is that it has ads. If you like GOM Player’s free version, we suggest you get the $15 premium ‘GOM Player Plus’ version for an ad-free experience.

Kakao Corp’s PotPlayer is an option you can consider if you’re looking for a powerful media players for Windows 10. Other than the standard features you get from all media players, PotPlayers supports H/W acceleration, support for 3D content, and different types of subtitles and codecs. A PotPlayer feature that you won’t often find in other players is the ability to bookmark specific scenes or chapters for quick access.

While the default theme of PotPlayer looks good enough, you can tweak it with the help of skins from settings. One subtle UX enhancement of PotPlayer worth pointing out is that it shows the video’s overall progress in Windows 10’s taskbar. The player received backlash for ads, but it has since been removed. Overall, PotPlayer is a good alternative to the default media player present in your Windows PC.

DivX is a media player that looks simple but packs a ton of features. You can use the player to stream videos to DLNA-compatible devices, use multiple subtitle tracks, and more. The free version, however, comes with ads. You need to purchase the $20 premium version to get an ad-free experience along with other features.

Features exclusive to the Pro version of this media player for Windows 10 include an editor to crop video border and add custom logo overlays, the option to import videos from Google Drive and Dropbox, video conversion, audio enhancer,  HEVC 10-bit playback, and AC3 audio playback.

Apart from the usual 1080p,4K, and 8K videos, you can use 5KPlayer to play 360-degree videos. Moreover, it supports AirPlay and DNLA wireless stream for easily streaming media. You can also utilize the embedded online video downloader to download videos from YouTube and 300 other video sharing sites.

5KPlayer also packs an online radio feature that lets you listen to satellite radio stations. Apart from this, I like that 5KPlayer also comes with handy controls for rotating the screen, taking snapshots, and video recordings in the main player UI.

Films and TV app is the default media player for Windows 10, but it doesn’t often get enough credit. Sure, it may not be as feature-rich as other players listed on this list, but it is functional and will serve the needs of an average PC user.

As long as the videos that you usually watch plays just fine on Films and TV, there’s no inherent need for you to switch to another app. Not to mention, the interface and overall experience while using Films and TV is often overlooked by many. If you’re not a power user, you can stick to Films and TV for media consumption.

Choose from the Best Media Players for Windows 10

So, those are the best media players you can use on your Windows 10 PC. It’s incredible to see how the VLC player still manages to retain its pole position among other popular media players for the Windows operating system. Which one of these media players do you use? Let us know in the comments section below.